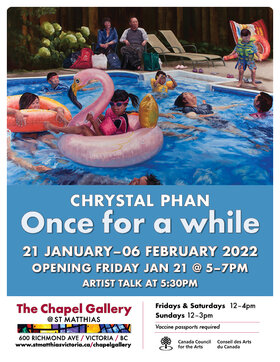 'Once for a while': Chrystal Phan

Visual Arts: Painting
In an era of heightened animosity towards immigrants and the rise in anti-Asian hate crimes, artist Chrystal Phan’s upcoming solo exhibition is a timely debut. Featuring large-scale oil paintings of Vietnamese Canadian life, this show is the first of its kind to explore humour in the Vietnamese Canadian immigration experience as a way to combat negative stereotypes and bring Canadians together through the awkward experience of finding one’s place in unfamiliar territory.

When attending the Chapel Gallery, please join us in respecting the Provincial Health Officer's direction regarding mask wearing and vaccination. Thank you for contributing to all our health and wellbeing!


Artist statement
‘Once for A While’ is a series of oil paintings that explore a Vietnamese family’s awkward attempts at integrating into Canadian life.
Using examples from my own childhood and those of friends, the intention is to capture humorous moments where cultures have clashed. For instance, in the composition “Biking for Charity” my father rides a bicycle. His siblings are horrified at witnessing this act because cycling signifies poverty from a Vietnamese perspective, yet it signifies something completely different in the Canadian context of health, leisure & environmentalism.
Through these paintings I hope to draw attention to how the interpretation of other people’s actions relies heavily on our own cultural biases and how that can have positive or negative consequences in terms of how we relate to one another. While there are many darker examples of how such differences can cause conflict, I’ve chosen a lighter approach to telling this story. By doing so, I hope to increase accessibility to a wider audience.
The paintings have been created using classical western painting techniques. I believe that employing a classical treatment will draw attention to the subject matter because viewers are not accustomed to seeing Asian figures portrayed in this way. The visual disjuncture will hopefully invite viewers into thoughts and discussions about the paintings. While the series alludes to many topics, such as family,
cultural diversity, and immigration, I am particularly focused on prompting a discussion around the different ways immigrants do and do not perform their ‘Canadian’ identities and what that means to the collective society in terms of defining and sustaining a national identity.
Artist Biography
Chrystal Phan is an emerging artist living in Victoria, British Columbia, Canada. She trained in a classic atelier and has been exhibiting works of oil on canvas since 2018 with a focus on portraiture and nocturne landscapes. Her works are held in private collections in Canada and the United States.
Chrystal was the recipient of a Canada council for the arts grant in 2020, which has enabled her to create this important body of work.