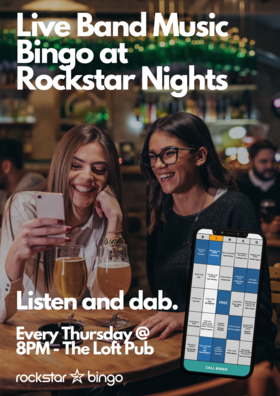 Powered by SuperSauce. Live at the Sticky Wicket at 919 Douglas Street in the Strathcona Hotel. Learn more: https://rockstarnights.ca

What is Rockstar Nights exactly?
Like Music? Play Bingo?
Then you definitely need to check out Victoria’s newest music craze.

Rockstar Bingo is the brainchild of Victoria’s favourite classics to modern rock cover band, SuperSauce. A fun-loving band of seasoned professionals who love what they do while also living a little on the edge … every show is an adventure, sometimes even a surprise.

But what’s really got the locals talking is the latest wave to hit Victoria’s music scene. Introducing Rockstar Nights – an interactive weekly music game show that comes to you live from the The Sticky Wicket in Victoria, BC.

Every Thursday night from 8 to 11pm, SuperSauce gears up to play a weekly game of Rockstar Bingo. Bring your friends and your phone and get ready to sing along and play #livebandbingo.

Sometimes a cover band is so good, you almost prefer the tribute remix to the original track. SuperSauce is that kind of band. SuperSauce is a band that enjoys their own company as much as they do performing for others – likely because they don’t take themselves too seriously. With their fun-as-it-gets demeanor and skillful musicianship, thi... more info
Submit info on this show to our admins