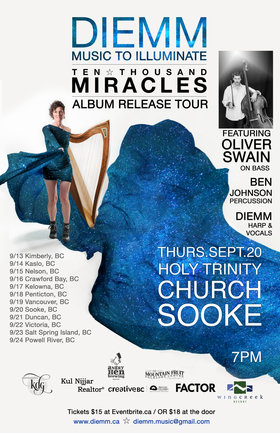 Music: Folk / Celtic / Latin / World
To entertain is one thing. To enrich is another. Singer-Songwriter-Harper-Poet Diemm plays for that one note, that one resonant chord that opens a cascade of ‘yes’ inside you.
Featuring critically acclaimed folk-roots artist Oliver Swain on acoustic bass, and world percussionist Ben Johnson - who are also featured on the new album - Diemm’s Ten Thousand Miracles Album Release Tour is a celebration of Diemm’s debut Chamber Folk album, with thirteen concerts in churches and halls across her home province of BC Canada. The rafters will ring!
Diemm holds hands with the Muse and bows to the power of music to align and illuminate. You’ll leave lighter, clearer, and more inspired than when you walked in, as though you’ve sprouted wings.

Oliver Swain, a Juno and WCMA nominated Americana and Folk-Noir musician from Victoria BC spent a dozen years in some of North Americas most loved roots bands(Outlaw Social, The Duhks, The Bills) before releasing 'In a BIG MACHINE' in 2011 to rave reviews “Oliver Swain's brilliant vocals and genre-agnostic style make 'In a BIG MACHINE' one of the... more info
Submit info on this show to our admins