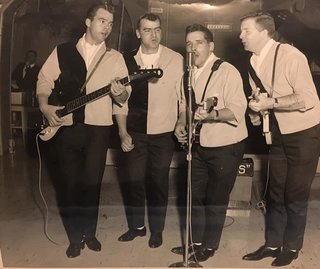 Photo L-R is Dick McDonald (bass, vocals), Bob Descoteau (vocals), Harvey Parsons (guitar, vocals) and Bob Anderson (guitar, vocals) *All members of the band were crew members on HMCS Saskatchewan when it was commissioned in February 1963, and subsequently sailed to Britain and Europe that year. While on leave in Britain, and when they picked up British signals on the radio, the friends began he... more...

Status: Broken Up
- Last confirmed Jun. 19, 2019
Submit info on this band to our admins