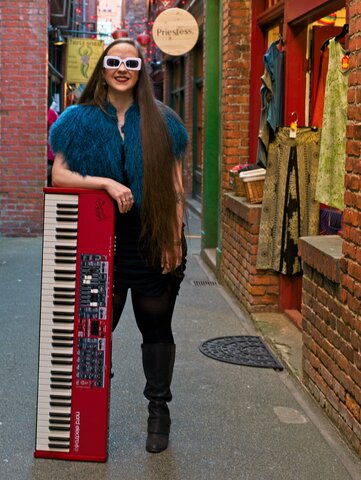 Victoria, BC, Canada's Alli Bean is a multi-award-winning Canadian powerhouse blues/jazz/pop-influenced songwriter and vocalist. Drawing influence from a list of artists including Wynton Kelly, Horace Silver, Fiona Apple and Amy Winehouse, her compositional style leans toward the bluesy funky side of the street, with a twist of jazz and a dash of sass for good measure.

Since her start in classical piano in the 90’s, Bean has explored diverse popular styles of music from country and rock to R&B, as well as attained a Bachelor’s Degree in Jazz Studies. Currently on the roster of Indie Entertainment, she has experience in multigenre bands and ensembles. This variety of vernacular has influenced her unique sound. Versatility is one of her superpowers. With
various groups, Alli has played venues around Vancouver Island, Canada including The Port Theatre, Hermann’s Jazz Club, Alix Goolden
Hall and The Union Club of BC. Between 2014 and 2018, with Nick LaRiviere & the Soul Source R&B Band, Alli played several fundraising events for local nonprofit organizations including The Living Edge and Rainbow Kitchen. In the summer of 2019, with the Hollobodies, she opened for talents such as Wise Youngblood, Quadra Sound and Daniel Wesley. She has recorded with Island talent such as The Grinning Barretts, Jade Bell, and Phil Bulmer.